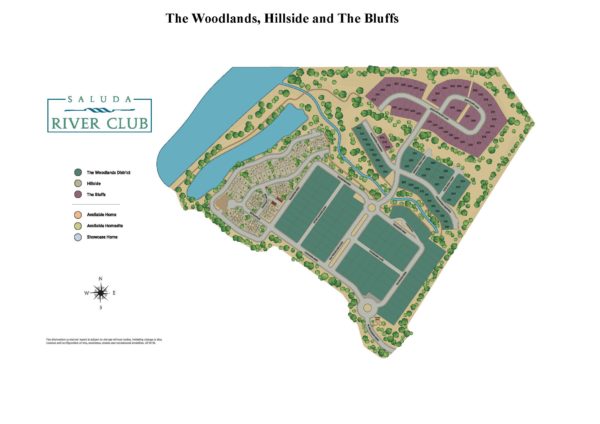 “No house should ever be on a hill…it should be of the hill. Belonging to it.”
~ Frank Lloyd Wright

A 2014 visit to the Italian Riviera left Saluda River Club developer Andy White with a sense of awe. He was especially moved by Cinque Terre, a chain of five centuries-old fishing villages carved into the base of the Liguria coastline.

The image of these charming intertwined towns was never far from Andy’s mind as he contemplated a new Saluda River Club neighborhood.

More than four years later, Andy and his team proudly introduce Hillside at Saluda River Club. A collection of 72 “two”- and “three”- bedroom villas, Hillside occupies a naturally terraced formation on the northern boundary of Saluda River Club. Though inspired by the visual jumble of Cinque Terre’s colorful villages, the resulting design is wonderfully serene.

The concept behind Hillside — a collection of villas of between 1,100 and 2,800 square feet nestled around a courtyard — is ingenuous. The impressively affordable villas are built into the natural contours of the hillside. As a result, no two are alike. Access is seamless with dedicated roads serving each collection of villas plus surface parking and drive-under garages.

The neighborhood’s uniqueness is enhanced by its location along the Saluda River. Kayakers or those passing by on golf carts never grow tired of the sight as they gaze up at a neighborhood that is not on a hill, but of the hill.

Inspired. Innovative. In a class by itself. Look up to Hillside.

These homes are built and ready for your family to make them your own.

All homes available to build

See what Saluda River Club has to offer by touring one of our showcase homes.

Voted America’s Best Community, Saluda River Club is the most sought after place to call “home” in Lexington, SC.

It’s a place. A feeling. A way of living that’s captured the hearts of homeowners at every age and stage.

When Saluda River Club opened in 2008 we knew we were onto something. But we never dreamed we’d become the most successful new home community in South Carolina history.

Our residents say it best…