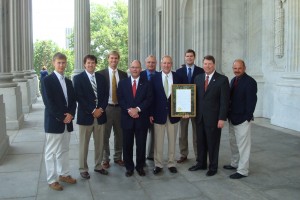 They were presented with a Resolution commemorating the community on winning the Best in American Living Award (BALA) for Community Design.

“It’s one thing to be recognized by an industry group, but for members of the General Assembly to take the time to honor our efforts in this way really meant a lot,” said Walter.

The BALA award is sponsored by Professional Builder magazine and by the National Association of Home Builders.   Saluda River Club is the second South Carolina community, and the first in Columbia, to receive it.

The Resolution had all of the “be it resolved” formality that’s typical of these proclamations.  But the mood was as warm as you can imagine, with plenty of handshaking and friendly greetings from lawmakers from the Midlands and other regions of the state.

Thanks again to the General Assembly for honoring us in this way.  We’ll remember this day for many years to come!