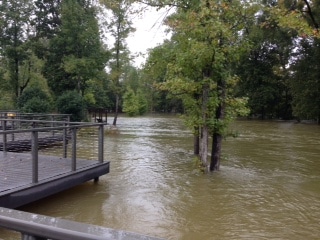 When Developer Andy White started building Saluda River Club, the master-planned neighborhood that opened in 2008 on the banks of the Saluda River, he made certain that the community’s infrastructure, amenities and homes were designed and engineered to withstand a weather event of epic proportions – like the flooding that occurred here in early October.

As Andy White explained in his almost daily emails to the Saluda River Club residents during the October flooding in Columbia:

“Our infrastructure performed as it was designed to do.  The drainage system was overwhelmed by the floodwater, so you saw the retention and detention ponds covered by floodwater – by design.  However, all of the sanitary sewer system inlets were installed above the predicted flood elevation, so we have seen no evidence of storm water intrusion into that system.  The water distribution system was also installed in such a manner as to avoid infiltration from contaminated water.  Again, we have no indication that such an intrusion has occurred. 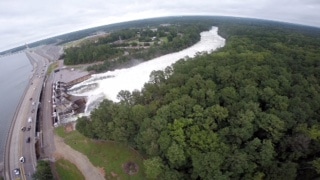 Like the development infrastructure, the Chickawa Outdoor Center was designed to withstand a 100 year flood. The 100 year base flood elevation for the area around the Chickawa is 194’ above mean sea level (“MSL”), meaning that it is reasonable to expect at least one event like the recent flood to reach that height every one hundred years.  The Chickawa Outdoor Center was designed with the knowledge that a flood like the one we just experienced would happen at some point.  Therefore, the finished floor of the main building and the pool deck was set at 196’ above MSL – two feet above the flood elevation.  The lowest part of the unenclosed deck system is at 191’ above MSL. Since the flood waters never reached that lower deck surface, the crest was about 190’, which is about 4 feet below the estimated level of a 100 year event.  Our engineer has defined the recent flood as a 50 to 100 year event, and it was completely man-made by the necessary and rapid release of water from Lake Murray.

The structure of the building was designed to withstand the flood we just experienced and a cursory inspection indicates that it performed as it was designed.”

Weddings and Parade of Homes.

Saluda River Club and the more than 245 homeowners who live here weathered the storm remarkably well. The community and grounds did not suffer substantial damage thanks to Andy White’s foresight and the top quality construction of this beautiful riverfront neighborhood.

As a matter of fact, Saluda River Club residents hosted an outdoor wedding as planned – just four days after the floodwaters receded, with a second wedding scheduled later in October. Saluda River Club also welcomed visitors to its October Parade of Homes during the last two Sundays of the month.

The Saluda River Club community was much more fortunate than many of its downstream and cross-town neighbors in the Columbia area, and many residents of Saluda River Club banded together during and immediately following the flooding to help with clean up and flood relief efforts.

For instance, parents in Saluda River Club, along with the young adults, planned a number of fundraising events that were hosted by the children at Saluda River Club (with adult supervision).

On October 9, Saluda Kids hosted a Bake Sale and Donation Drive on The Village Green where people could purchase some baked goods, and/or donate flood relief supplies.  On Saturday, October 10, there was a Preschool Craft Table for little ones to make a Halloween craft, and a Car Wash.

For the residents at Saluda River Club, the ease with which their lives on the riverfront returned to normal was a blessing – as well as a result of the extensive planning and careful engineering by the developers and builders of Saluda River Club.

To learn more about the award-winning Saluda River Club master-planned community, please schedule a visit soon. For more information on available homes, or for directions, please call 803-358-3969 or visit www.saludariverclub.com.