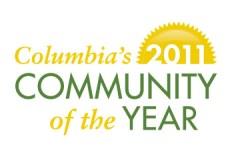 Saluda River Club, the Midlands most successful new home community, was recognized February 18 with nine REGAL awards. The annual recognition program is sponsored by the Sales and Marketing Council of the Home Builder Association of Greater Columbia.

For the second time since its grand opening in October 2008,  Saluda River Club was named “Community of the Year.”

Notes Lifestone Residential partner Andy White, “We know from sales and homeowner testimonials that Saluda River Club is number one with consumers. Earning such recognition by our industry peers is especially gratifying.”

Saluda River Club has succeeded during a difficult real estate market by offering extraordinary homes plus a unique community lifestyle for all ages. “There really is something for everyone – from parades and parties to kayaking, cards and book clubs,” says White. Top Lexington schools, including a new elementary school, are also a strong draw.

In just four years Saluda River Club has attracted more than 100 homeowners and $50 million in sales.