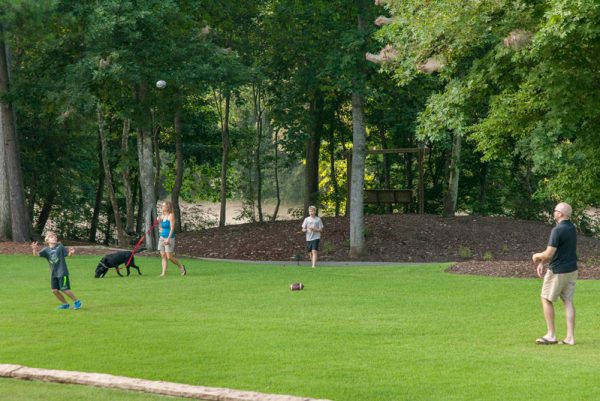 Saluda River Club is known for its outstanding, well-planned amenities. Residents have access to two swimming pools, at the Chickawa Outdoor Center and the Village Clubhouse (for adults only), as well as Saluda River Club’s

The outstanding amenities are an important part of living in the award-winning community located in a beautiful natural setting along the Saluda River, where miles of paved trails wind through all three Saluda River Club Districts (the River District, the Village District and the Woodlands District), and where there is also a beautiful nature trail system.

When Kelly and Adam Gregory selected to move to Saluda River Club in 2014, they based their choice on the community’s outstanding location and its fabulous amenities – but, they found so much more to enjoy here.

“I think that the best amenities at Saluda River Club are our neighbors,” said Kelly recently.

The young couple welcomed their son Emerson this summer, and experienced first-hand that Saluda River Club is a very welcoming community. “Being a new parent can be a bit isolating, but so many different neighbors came by to congratulate us, share tips and bring meals,” says Kelly. This in turn inspired her to start a weekly “Baby / Toddler Time” on Friday mornings in the Chickawa Outdoor Center.

“It’s a casual way for the many moms, dads and even grandparents at Saluda River Club to connect with other families and their new babies or young toddlers. The kids get to play, and we get to catch up and share the latest developments with others who are going through similar experiences. It’s a great opportunity to bond – hanging out at the playground when the weather is fine, or enjoying a planned activity indoors when it’s too wet or cold outside.”

Kelly remarks: “There is a sense of small-town living in this very welcoming community. Sometimes, it may take us up to an hour to collect our mail because we stop and visit with a lot of our neighbors along the way.”

Year-round at Saluda River Club, the sounds of kids playing outside fill the air – riding their bikes or playing pick-up football. “It’s such a happy sound! We all love it that our kids get to spend their free time and energy outdoors in this beautiful neighborhood. There’s nothing ‘virtual’ about playing outside!”

In addition to coordinating Baby/Toddler Time, Kelly is planning a number of community activities at Saluda River Club. “We are thinking about hosting quarterly beer tastings in 2016. We also organize a monthly Ladies Meet & Greet, which has already resulted in a number of new friendships.”

Right now, she and her husband are gearing up for the Ugly Christmas Sweater Party, an annual holiday tradition at Saluda River Club. “We got the Reggie Sullivan Band to play – a real coup! This will be another great party with our favorite people – our neighbors at Saluda River Club!”