Andy White of Edge City Homes and partner in Lifestone Communities, developer of Saluda River Club, is this year’s recipient of the Gordon A. Harrison Award.

Presented by the Home Builders Association of Greater Columbia (HBA) and sponsored by Stock Building Supply, the award is given each year to an outstanding home builder in the spirit of the man it is named after. According to the HBA; “Harrison is remembered for his high personal character and integrity as well as his commitment to helping others.” 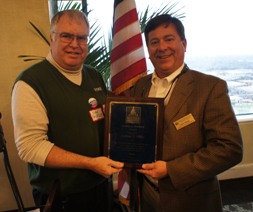 White has been a member of the HBA since 1997. He served as President of the Home Builders Association in 2003 and as Chairman of the HBA of South Carolina Legislative Committee in 2000, 2002 and from 2008 to present. The work of the Legislative Committee is vital to the association and all members throughout the state. Under White’s leadership the Association has gained many legislative victories on behalf of the industry including legislation to limit the abuse of impact fees on housing, property tax reform and a moratorium on a mandate for fire sprinklers in new homes.

White’s great commitment to his work has far exceeded expectations with Saluda River Club, a Gold Medal Winner for the nation’s Best Smart Growth Neighborhood and the site of the 2008 Parade of Homes.

According to White: “Saluda River Club is our first project under the Lifestone Communities banner, and for us it’s just the beginning. The future holds exciting times for builder/developers who are willing to think outside the box, offer diverse products and respond quickly to consumers by creating quality communities. That’s what Lifestone Communities is all about – the commitment of the three of us to be forward-thinking, in tune with today’s and tomorrow’s consumers, and to deliver the very best each and every time.”

For more information on Saluda River Club and the story of Lifestone Communities, visit SaludaRiverClub.com.

Schedule a Tour
Join us for a guided tour of Saluda River Club.

Enjoy Our Amenities
Nature is your backdrop for a resort-inspired lifestyle.

Schools Nearby
Learn more about our top-rated Lexington schools.