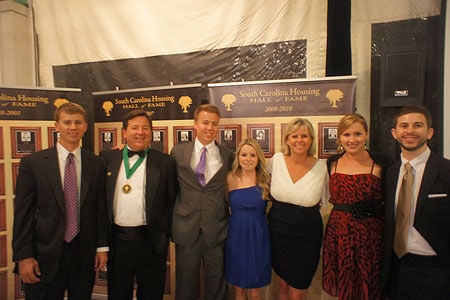 Andy White (second from left), his wife Debbie (third from right) and their family
at 2013 Housing Hall of Fame induction, Home Builders Association of South Carolina

Andrew (“Andy”) D. White, developer of Saluda River Club, the award-winning residential community located on the Saluda River in the Midlands of South Carolina, was inducted in the Home Builders Association of South Carolina’s Housing Hall of Fame in November. The prestigious award recognized his outstanding support of the South Carolina home building industry, his beautiful residential communities throughout the state, and his philanthropy, including fostering more than 40 children together with his wife Debbie.

2013 was a great year for White, who also won two Pinnacle Awards from the Home Builders Association of South Carolina for Saluda River Club, one for 2013 Community of the Year, and a second one for 2013 Best Overall Sales & Marketing. It was the second consecutive year that Saluda River Club was recognized with these top honors.

According to its website, “The Home Builders Association of South Carolina is a dynamic group of builders, remodelers, and businesses that supply services and products to builders and remodelers. Together they form one of the most influential groups in the state that drives the messages of affordable housing and home buyer protection. The HBA also protects the future of the home building business.  By meeting together and sharing ideas, the HBASC contributes to the economic growth of each individual member and affects change in Congress, the SC General Assembly, the courts and regulatory agencies.”

For directions and more information to the Saluda River Club, call 803-358-3969 or visit www.saludariverclub.com.